“Speak to Translate - Voice typing with translator & Dictionary” is specially designed for fast speak and translate purpose. This voice translator fulfills all your translation needs. Besides of voice to voice translation you can also type and translate which can help you to translate from any language into your desired language. Simply we can say by voice & you can do any kind of translation, either it’s text input or voice input.
Download APK
0/5 No votes
Report
Version
v5.3.0 [PRO][Mod]
Updated
December 30, 2020Requirements
5.0 and up
Size
12MBGet it on

Conversation translator (Interpreter):
Speak and translate is basically working as conversation translator, where two persons can talk in different languages on the same device. Do verbal translation by just tapping on mics of different languages. This is not simple voice translator but a complete solution of voice to voice translation. One person talks, and second person get translated voice of that language, then second person talks, and first person get translated audio. It might be served as interpreter.

Features of Speak to Translate:
– Two mics for different languages voice input to translate
– Accurate voice recognition for speech translation and dictionary search
– Free voice search dictionary to search word and its detail
– Save translation history like conversations or chat
– Favorite module for users to mark specific “voice and text translations”
– 100+ languages working in speech-to-speech
– All these languages are included in text-to-text & voice-to-text modes
– Text to speech function of the Translated text by voice typing
– Online voice recognition and translation technology
– Talk to translate by just tapping on mics
– Edit your translations and copy or share
– Copy, Paste and Share translations in a single tap
– Works with any app that supports text sharing
– OCR with image to Text translator
– Speak the translated phrase out loud
– Text Translator for all major languages introduced
– UI Improved in the latest release to meet user needs

Text & Voice Translator with Dictionary :
After voice interpreter a whole new module is added as a text translator so that translation can be available via text also. One can easily select the desired languages and write text or type by speaking then tap the translate button to see the result in the translated language. This can also help users to share the translated text to anywhere. Along with translation one can see the dictionary appearance at the bottom and can tap to see the word search detail. Listen the text by using speaker and share the dictionary meaning and details of that word with friends

Text input translator:
Voice to voice translator also have option of text input for translation. If sometimes you don’t want to speak and need to translate then text translation is better option, therefore text input is given along with talking translator. Text input is also needed when you speak something, and get any unexpected results, then you can easily edit and can change the voice input text.

OCR Text Scanner – Photo Translator:
Turn your camera and get the Translation of text on photo by using image to text technology. All you need to do is to put picture that has machine text on it and translate it with one tap in your desired language. The OCR text scanner will process the text and bring the accurate result in Translation box.
Whenever you need a translator or dictionary, think “Speak and Translate – Voice Typing with Translator & Dictionary” 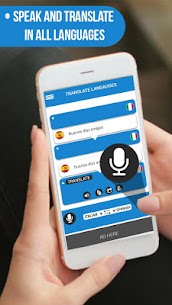 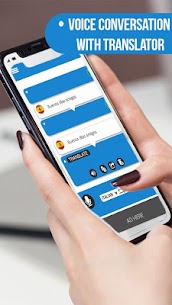 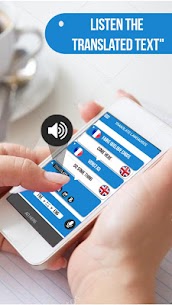 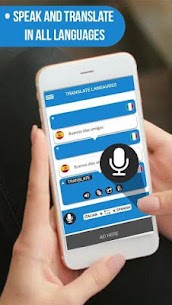 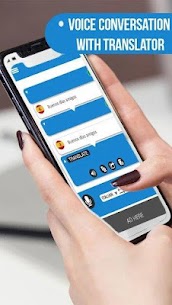